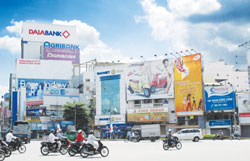 The breakthrough in the proposed draft law includes allowing advertising media to produce advertising supplements on their own as long as they report to the Ministry of Culture, Sports and Tourism 30 days in advance.

In Chapter 2, the revised content said the consumers had the right to refuse the advertisement information, the right to complain or to ask for inspection.

Regulations on advertisement billboards, placards, panels, banners and screens placed in the public places were also revised to create more convenience for advertisers and advertising contributors.

For rights and obligations of organisations and individuals producing advertisements, the draft law emphasised that advertising information onbusiness activities, goods and services must be accurate and clear. These individuals and organisations had to provide documents relating to business activities, goods and services, and they had to take responsibilities for that information.

Relating to advertising special products, goods and services, many deputies shared the view with deputy Nguyen Van Tien from Tien Giang Province when saying the draft law only mentioned the permitted or not permitted advertising activities, but failed to mention the limited advertising products that were not encouraged such as low alcohol (under 2.8 per cent alcohol by volume) and beer. Deputy Nguyen Thu Anh from Lam Dong Province suggested that advertising powder milk for children under 24 months be banned as the powder milk advertisement would mislead mothers regarding the value of powder milk and they might lose faith in the value of breast feeding.

The National Assembly focused on discussing levels of fines, supplemented punishment methods, and jurisdiction regulated in the draft Law on Administrative Violation Punishment during a session that was broadcast live on television yesterday afternoon.

He said, "These new fines are five times higher than the current ones which are not suitable with the current situation when violation cases have become more serious and complicated. Although strict administrative punishment methods are not the only tool to stop the violations, they are effective at this moment."

Besides being fined, all violators would be responsible for resolving the consequences caused by their illegal activities and be subject to other outcomes, such as completing programmes at rehabilitation centres, he said.

All deputies agreed with raising fines to higher levels. However, they proposed that the lowest and highest levels be considered to ensure their effectiveness.

Deputy Nguyen Van Hien from southern Ba Ria- Vung Tau Province said the current fine levels were too outdated and had little impact in preventing law violations. "This is especially true as more violations are being committed in fields of traffic, construction, environment and urban management. However, fines should be based on the current economic development situation and person's income," he stressed.

He said fine levels for individuals can be lowered but the ones for organisations should be raised.

Deputy Than Duc Nam from central Da Nang City said the highest fine level for individuals was beyond their affordability, especially the ones in rural, mountainous, island and border areas.

Deputies agreed that coupled with the implementation of these fines, the State should strengthen its management to ensure social order and security, improve people's knowledge about laws, and apply effective methods to promptly detect all violators.

According to Ly, the draft law also regulates that fine levels for violations in central-level cities and urban areas in the fields of environment, traffic and urban management be two times higher than other areas of the country.

Deputy Touneh Drong Minh Tham from central highlands Lam Dong Province suggested leaders of cities' people's councils be entrusted to make decisions for specific fine levels suitable to their cities' conditions, instead of the Prime Minister being responsible for this.

Regarding jurisdiction, the draft law regulates that courts take responsibility for making decisions to take violators to rehabilitation centres, or provide education, training, or health care treatment. Commune-level people's committees, on the other hand, are responsible for making decisions in which violators get re-education in their own localities. — VNS