Ho Chi Minh City, 27th April 2012 – The Bitexco Group was breaking ground on the most exciting property development in this city since the inauguration of the iconic Bitexco Financial Tower in 2010. Strategically located in the historic heart of Ho Chi Minh City, The ONE Ho Chi Minh City will be another Bitexco-led symbol of Vietnam’s emerging prominence on the global stage. 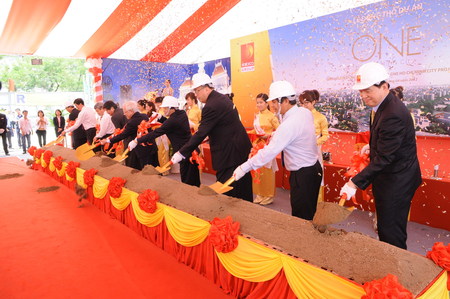 More than 300 guests from government ministries and the private sector have attend the significant event. They were also witness an agreement signing between the Bitexco Group and The Ritz Carlton Hotel Company LLC, under which the American luxury hotel chain will manage a six-star Ritz Carlton Hotel in The ONE Ho Chi Minh City. The 250-room hotel will be Ritz Carlton’s first in Vietnam, underlining the hotelier’s confidence in Vietnam’s business and tourism growth. During the event a Financing Investment Agreement will also take place between Mr. In-Suk Ko – CEO of Bitexco Group and Mr. Le Duc Tho – Deputy Director of Vietnam Joint Stock Commercial Bank For Industry & Trade (Vietin Bank). 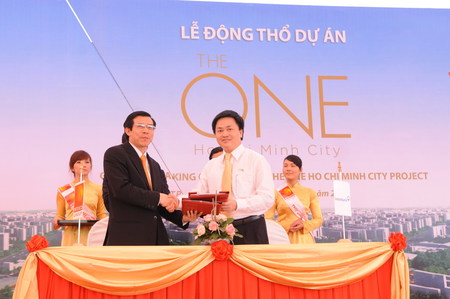 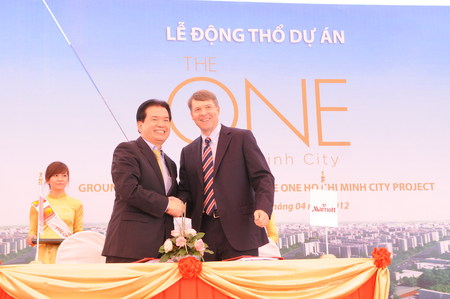 Mr. Vu Quang Hoi, Chairman of Bitexco Group of Companies, said: “Bitexco is honoured to be the developer of The ONE Ho Chi Minh City which will raise the benchmark for luxury and sophisticated lifestyle in Vietnam. We have embarked on this journey with one of the world’s leading luxury hotel chains, Ritz Carlton, which will usher new levels of luxurious hospitality in Vietnam. Bitexco believes in partnering with the world’s best and with that, we are also confident that top tier multi-national corporations will want to take up office space in The ONE Ho Chi Minh City’’ 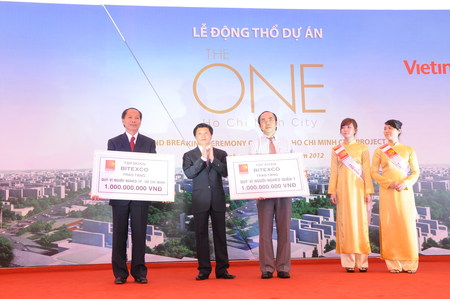 The ONE Ho Chi Minh City is one of the ‘’golden sites’’ identified by the Vietnamese government’s 2020 Vision programme to improve the social, economic and lifestyle conditions of Ho Chi Minh’s population. Bounded by four major thoroughfares, namely Le Thi Hong Gam, Calmette, Pham Ngu Lao and Pho Duc Chinh, the site is located on the southern side of Ben Thanh Square, the symbolic heart of Ho Chi Minh City. It is across the famous Ben Thanh Market, a sprawling shopping complex favoured by tourists and Vietnamese alike.

Standing at 240 metres in height, the 55-storey West Tower will contain 350 luxury apartments, making it the ultimate residential address in Vietnam. The shorter 48-storey East Tower will have 12 storeys of office space in the lower floors of the block. The Ritz Carlton Hotel will be located in this block, starting from level 24 with the VIP suites on the upper most floors.

Architect Mr. Fort-Brescia, drawing inspiration from the legendary dragon, used the towers to represent two dragons rising from the ground with their tails coiled and pearls dangling from their mouths. The cantilevered tops represent the dragons’ heads while the glass cubes are figurative depictions of Vietnamese pearls in the mouths of the dragons. The podium, located at the bottom of the towers signifies the coiled tails of the dragons. Said Mr. Fort-Brescia: “The cubes, which glow at night, will be easily recognised from any point in the city. These unique features add to the iconic stature of the building as a highly distinctive and prestigious address in Ho Chi Minh City.”

‘’Through the design, we want to convey a strong, convincing sense of confidence and purpose in Ho Chi Minh City and the people of Vietnam. It provides a powerful reminder to current and future generations, of Vietnam’s stature as ‘’Pearl of the Orient,’’ said Mr In-Suk Ko, CEO of Bitexco.

The ONE Ho Chi Minh City is one of many projects under Bitexco Land’s portfolio. In 2010, it inaugurated the Bitexo Financial Tower which recently named one of the world’s top 20 most iconic skyscrapers by CNNGo, the ultimate insider’s guide to the top travel, entertainment and lifestyle experiences in Asia Pacific. Other upcoming projects include Nguyen Cu Trinh Center and the Hoang Mai Central Township.